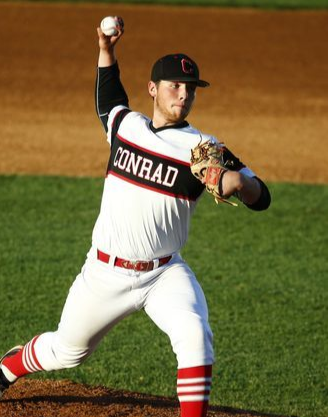 Conrad Redwolves fell to the Caravel Buccaneers in  a heartbreaking 1-14 ending of the DIAA  Finals at Frawley Stadium, Saturday June 3rd. The Redwolves had a fantastic season spending most of it undefeated. However, a State Championship for Redwolves was not meant to be.  Conrad’s first and second pitchers were not available due to being used in previous games.   Marshall Awtry, Conrad’s first baseman and rising senior, was used in the the first and second innings.   The Buccaneers early lead set the tone for the rest of the game ending in our defeat. A record breaking 2000+  spectators came out to support these teams with the bulk being Redwolves fans. Conrad supporters were disappointed with the outcome but pleased that such a small school could make it so far. The season was a compliment to the hard work and dedication of the Redwolve’s players and coaching staff.