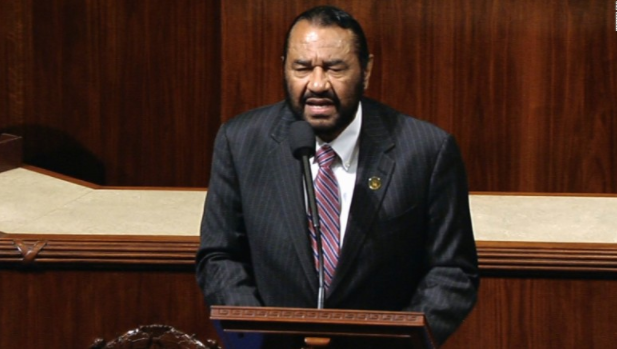 The political parties in the House came together Friday to stop an attempt to impeach President Trump. Texas Representative Al Green came to the House floor at 12:13 p.m. on Wednesday to offer articles of impeachment under special House rules requiring a floor vote; he returned to the floor at 1:34 to force that vote. House Majority Leader Kevin McCarthy motioned to table the resolution, which was adopted on a 364 to 58 vote. Green has discussed impeaching Trump and previously filed impeachment articles in October, nearly forcing a vote at that time before House Democratic leaders persuaded him to temporarily abandon the effort. Greens Impeachment Speech was given, and within he stated,  “As I have said before, this is not about Democrats, it is about democracy. It is not about Republicans, it is about the fate of our Republic. May everyone vote their conscience knowing that history will judge us all.” Green weighed in and focused on Trump, criticizing his failure to quickly denounce the white nationalist marchers in Charlottesville. After the vote, Green claimed his attempts to impeach Trump would continue stating, “It’s a process, and this is another step in the process,” he said. “Just stay tuned. I assure you, that’s not the last vote to impeach.”